The biometrics and ID Scan, if enabled as part of a check recipe, will prompt new applicants to take a photo of their ID document as well as a selfie that is used to prove identity document ownership so that only the owner of the identity document can use it to verify their identity and access services.

The biometrics and ID scan result is made up of 3 reports.  Each report returns a result which in turn contributes to the overall profile status.

If the system is configured to accept multiple documents, you will see all of these reports for each document.

Each report will return a result that is taken into consideration when calculating the entire profile status.

The facial recognition report has an overall result, which is either a clear or a consider.

When they receive a consider, the report breakdowns will indicate any issues found. Depending on the reason, and your risk appetite you might decide to reject the user, or manually review and override the result.

Asserts whether the quality and integrity of the uploaded files were sufficient to perform a face comparison.

Asserts whether the selfie or video is trustworthy. This will return a consider when a selfie or video is found to be digitally tampered with, from a fake webcam, emulator, or from other dubious sources. It indicates deliberate attempts at defrauding the system.

This will flag as consider when the person doesn't match the face on the identity document. A similarity score will also be returned. The closer to zero that score is, the less likely the two faces belong to the same person.

Asserts whether the person in the selfie or video is real.

This will return a consider when the selfie or video contains a face that is not real, also known as a spoof. For example, a face on a piece of paper, a face on an identity document, a face on a digital screen, a screenshot, etc. A spoofing score will also be returned. The closer to zero that score is, the less likely the face is real.

Asserts whether the numbers and head movements were correctly executed. This will return a consider when the user failed to correctly follow the instructions to say the correct numbers and/or turn their head in the correct direction.

Onfido is only able to request a video for liveness. Depending on device, browser, or camera availability, it may be only possible to retrieve a still image from the user.

The Document report employs a variety of techniques designed to identify fraudulent documents. It checks the internal and external consistency of the identity document provided by the applicant to identify potential discrepancies.

The overall result may show clear, suspected, caution, or rejected as outlined below. 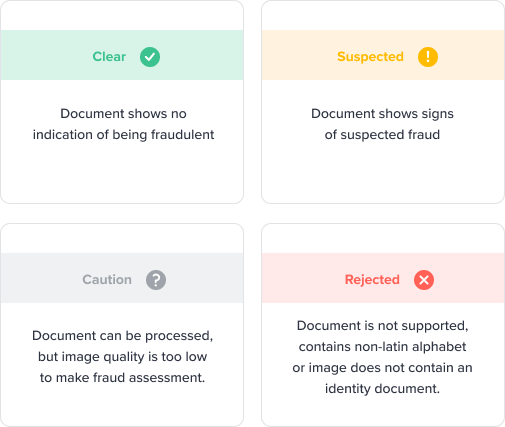 Asserts whether the document was of sufficient quality to verify.

Asserts whether the image was a color one.

A result of clear for this sub-breakdown will assert if the document was of enough quality to be able to perform a fraud inspection.

Asserts whether the submitted document is supported.

Asserts whether the quality of the image was sufficient for processing.

Asserts whether visual (non-textual) elements are correct given the document type. Uses the following sub-breakdowns:

If 'Document Expiration' shows a flag, this means that the document has expired.

If 'Expiry Date' is flagged, this means that the expiration date has the incorrect format.

Asserts whether data represented in multiple places on the document is consistent. For example, between MRZ lines and OCR extracted text on passports.

Asserts whether the image of the document has been found in our internal database of compromised documents.

Asserts whether the document has been identified as lost, stolen, or otherwise compromised.

This report may return a clear, caution, or rejected result. 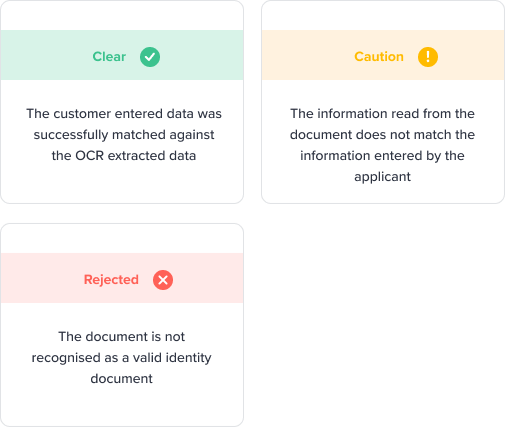 Each piece of mismatching information will be highlighted and flagged for review.

Any result may be manually overridden.